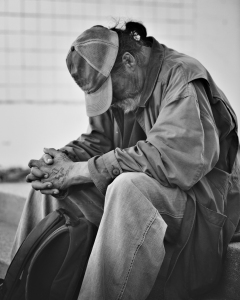 So it’s become REALLY popular to talk about karma in our culture. We hear about “bad karma” and “good karma.” I’ve heard people make threats like “karma is going to get you.” I even had one friend tell me that he believed in karma because it offered a sense of justice. I countered that karma seems like its about justice when we see the bad guys suffer, but it looks a lot different when the bad guys see you suffer.

You see, karma is more than classical “cause and effect” or “sowing and reaping.”  It is a fatalistic understanding of the “universe,” in that those who suffer deserve their suffering because of the evil they have done in the past.  Inversely those who prosper have earned their prosperity due to the good they have done in the past.  This is certainly more than “what goes around, comes around,” especially when it is applied children. I mean pause for a moment to think about kids suffering with leukemia.  Do they deserve that? Karma says they do. What about children born into poverty who die of preventable diseases? You see in some places around the world, a belief in karma enables people to pass by those who are suffering and call it “justice” for the sins committed in past lives.

If you haven’t guessed already, I don’t believe in karma.  But I serve a growing population of young people who do “believe” in karma, at least on a surface level.  Most when challenged to lay the blame somewhere for children with leukemia come up woefully short and hopefully abandon the scheme.  The problem is that it is marketed on the show’s they watch.  (Turn on the TV tonight, pick a random sitcom and see how long it takes for the word “Karma” to pop up… It will happen more often than you think.) And while marketed, it is often presented in terms of “what goes around, comes around.”

In a sense, karma IS about justice.  The real problem is when it crosses over to answering why injustice happens in the world.  The night I typed this, there was a man on the news who killed his kids.  Karma says he’ll get what is coming to him.  However, it also says that those kids got what was coming to them as well.  But then you have to ask, “What did they do?” A belief in karma indicates that they must have done something terrible in a previous life. Karma answers injustice by calling it justice for something done previously.  Ultimately in the system of Karma, injustice does not exist.  We all get what we deserve.

Does a man reap what he sows? … sometimes, but that isn’t karma.  That’s more like a law of nature, not of life.   If you mess with a bee you, you might get stung.  If you plant and cultivate and apple orchard, you might get apples.  But if someone attacks me for my apples, nobody is reaping what they sowed… It’s injustice.  Isn’t it about time that we put karma aside and look at true justice which comes from God the giver of life and the avenger of those who have been wronged. (Romans 12:19).

If you have a chance read John 9 where Jesus refutes his disciples understanding of karma.

One thought on “Something you should know about karma”