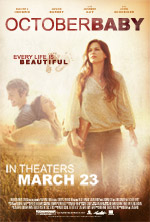 So I had the chance to check out a new movie the other night with my wife. We went to go see the movie October Baby (due in Theaters on March 23rd). We were initially worried that we were in for a long night of b-rated christian acting but were pleasantly surprised by the quality of the production.

The theme of the movie centers on a young woman named Hannah, who finds out through a medical condition that her parents are not her birth parents and she suffers from her condition as a result of a failed abortion. That is to say that her birth mother attempted to get an abortion, but ended up delivering a live baby instead. Hannah then sets out on a journey to figure out who she is, where she came from, and who her real mother is.

I was impressed with the authenticity with which the abortion issue was discussed. The themes of grace and forgiveness continued to resurface.  I appreciate the fresh perspective on an otherwise tension filled issue. My wife and I will be back opening weekend to take it all in again. Check out some of the video’s below and the website to get more information and see if it’s worth your time.

One thought on “October Baby: Coming to a Theater Near You!”