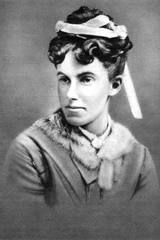 Charlotte Digges Moon was born in 1840 to a wealthy and elite family of Albemarle county Virginia. She was born third in a family that would eventually come to have seven children.[1] Her childhood home was the Viewmont estate, a tobacco plantation within proximity to three presidential estates, Monticello, Montpelier, and Ashlawn.[2] Lottie’s maternal uncle had once purchased the Monticello estate, former home of Thomas Jefferson, in order to preserve it.[3]

The Moon household thrived on income from its vast land holdings that had been accumulated and developed since the middle of the eighteenth century. Lottie’s father was estimated to have had land holdings in the neighborhood of fifteen-hundred acres.[4] As a plantation in the pre-Civil War era, many of their cash crops like tobacco were processed by slave labor.[5]

During her younger years the commonwealth of Virginia was divided in religious turmoil. The Presbyterians and Baptists were divided on the issue of infant baptism. Lottie’s father, Edward Moon, who was a Presbyterian, became a Baptist when he was stirred to religious conviction while reading a pamphlet on pedo-baptism given to him by his presbyter.[6]  Catharine Allen notes that Lottie’s father became quite a devout Baptist in his leanings, “He became a deacon and a clerk, led in the establishment of a Sunday school, and often represented his church at Baptist association meetings”[7]

Lottie’s mother, Anna Moon, was also a staunch Baptist, even after Lottie’s father passed away.  Sullivan writes that Anna Moon was such a strong supporter of the Baptist church that she “housed the local minister in her home when there was no steady pastor available… she was instrumental in building a Baptist church in Scottsville…until a church was built, she lead regular Sunday church services in her home for neighbors, children, and slaves.”[8]

Other denominational issues would also plague the Moon household. Lottie’s maternal uncle, James Barclay warned Lottie’s mother and grandmother to stay away from revival services that came to nearby Scottsdale because of their Campbellite leanings. However, he later attended the services along with his wife and they found themselves joining with a new denomination called the “Disciples.” He would become an elder and builder of the church in Scottsdale. He would also serve as the Disicples first missionary.[9]

However, the dedication of her parents to the Baptist denomination and Christian faith did not seem to rub off on Lottie or the other Moon Children.  Catherine Allen writes, “Despite the parents’ best efforts, the acrimony of religious dispute left a bad impression on the children. They developed real hostility toward Christian matters and stayed home from church whenever possible.”[10] In the fall of 1852, Edward Moon grew sick and seemingly was within sight of death. He lamented to his pastor and friends within the hearing of his children that he was grieved that his two oldest children were grown and yet unconverted. Allen states, “The children gathered at bedside showed no remorse at this emotional plea.”[11]

Edward moon was cured of his sickness and in 1852 set off on a journey to buy cotton in New Orleans. On the way, however, the steamer caught fire forcing the passengers to flee. Edwards stayed behind struggling to pull a large piece of leather luggage that contained the funds he needed to make his purchases.[12] In the middle of his struggle he was struck with what is assumed to be a heart attack or stroke and died shortly thereafter on the bank of the Mississippi. The date was January 26, 1853 and young Lottie Moon “entered the critical teen years” without a father.[13]

[4] Jerry Rankin and Don Rutledge. A Journey of Faith and Sacrifice: Retracing the Steps of Lottie Moon. (Birmingham, Ala.: New Hope, 1996), 25.

One thought on “Lottie Moon (A Biographical Sketch): Growing Up Lottie”