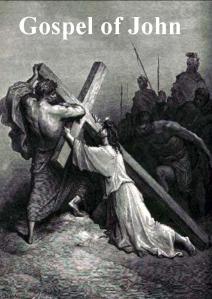 Just a side note before we get started.  I’ve been blessed beyond measure for the last few weeks of my life have been revolutionary in terms of my walk with God and my understanding of His Word.  Familiar passages have taken on new meaning as I have been digging deeper.

John 5 is rich with meaning.  God has blessed me with more than I will ever be able to share here, but here are a few highlights that I hope are a blessing to you…

Who Get’s the Glory (John 5:44).  The folks mentioned in this chapter were busy keeping rules.  They were rule keepers.  They gave each other props for figuring out how to do things by keeping all the rules and a few extra traditions along the way.  They were in the business of giving each other glory.

Basketball hadn’t been invented yet and so I guess they were glad to become fan’s of different guys who could parse the scriptures and teach diligently.  But these guys were missing it.  Jesus was standing in their midst and they were worried about the rules (some of which they made up). They didn’t want to share their “glory.” They didn’t want to give him credibility.  They said he was breaking the Law…coincidentally the Law pointed right to him.

You see that’s the big deal.  That’s the big hairy monster in the room that no one wants to talk about.  The scriptures (Old and New Testament) reveal Jesus.  Yet how many times do we examine passages or hear sermons preached that share the “moral of the story” like they were just fables. The truth is that the scriptures are true and they point to Jesus.

The story of Jesus walking on Water and Peter coming out to meet Jesus… is actually about Jesus… It isn’t about having faith to step out of the boat… It’s about the savior that can walk on water and who will come to us in our deepest storms and even when our faith fails will stick out his arm to save us… The first way leaves people with a “moral” a principle if you will on how to live… “Have faith”… the second way points us to Glorifying God.  To be fair these statements are two sides of the same coin, but one way says it was my faith that kept me afloat… the other way says it was Jesus who kept me a float even when my faith was sinking.  In the first order I get the glory for faith (or shame for no faith). In the second order Jesus get’s the glory (and he should… the story is about how he saved Peter)…. You see you’ll never really have the faith to get out of the boat until you trust the one who has come to you in the middle of the storm.

The story of Daniel isn’t about picking your friends wisely or even how to live godly in an ungodly world.  The story of Daniel is ultimately about Jesus.  One way to preach Daniel is to talk about standing up to peer pressure and how we should all take a stand like Daniel did.  But the Story of Daniel is really about Serving the King of Kings.  You see you will never have the courage to stand before an earthly king and defy his edicts if you do not have a relationship with the king of kings.

one way of interpreting the scriptures says that you should “live better” and you should, but this ultimately just leads to a form of legalism.  The second way seeks out Christ at every turn and provokes our hearts to praise and worship.  By coming to a place of worship we relinquish our grasp on the things that would stop us from fully worshiping God.  In essence… We have faith to step out of the boat and we have boldness to defy a king… but only after we have come to a place of worship.

Save us from staring at your scripture and missing the obvious truth about you.  We beg that We would see Jesus at every turn in your word.  Where our eyes are week, bring us teachers to strengthen our sight so that we might see you.  Give us grace to grow in knowledge of you.