Now when Jesus learned that the Pharisees had heard that Jesus was making and baptizing more disciples than John (although Jesus himself did not baptize, but only his disciples), he left Judea and departed again for Galilee. And he had to pass through Samaria. So he came to a town of Samaria called Sychar, near the field that Jacob had given to his son Joseph. Jacob’s well was there; so Jesus, wearied as he was from his journey, was sitting beside the well. It was about the sixth hour.  (John 4:1-6, ESV) 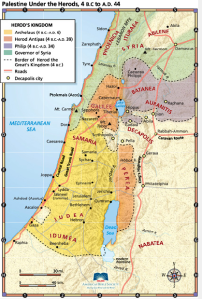 Between Jerusalem and Galilee was a territory known as Samaria.  Samaria was filled with a people who could trace their ancestry back to Jewish peasants who intermarried with the foreign people brought into the area when Israel was away in Babylon.  The Jews hated the Samaritans and the Samaritans hated the Jews.  Most devoutly religious Jews avoided the whole area like the plague.  When they had to travel between Galilee and Samaria they would opt to go a longer route and cross the Jordan river and head  north that way.  The fact that Jesus is traveling through Samaria shows that he is not taking his time getting back to Galilee and perhaps God has some big plans for Samaria.

We learn just a few verses later that Jesus’ disciples go into town to get food, leaving them at the well alone.  As he is sitting their tired from their long and hasty journey a woman comes to draw water from the well.  Now as she approaches the well, let’s look at things through her eyes.  Who does she see when she sees Jesus?

A woman from Samaria came to draw water. Jesus said to her, “Give me a drink.” (For his disciples had gone away into the city to buy food.) The Samaritan woman said to him, “How is it that you, a Jew, ask for a drink from me, a woman of Samaria?” (For Jews have no dealings with Samaritans.) Jesus answered her, “If you knew the gift of God, and who it is that is saying to you, ‘Give me a drink,’ you would have asked him, and he would have given you living water.” The woman said to him, “Sir, you have nothing to draw water with, and the well is deep. Where do you get that living water? Are you greater than our father Jacob? He gave us the well and drank from it himself, as did his sons and his livestock.” Jesus said to her, “Everyone who drinks of this water will be thirsty again, but whoever drinks of the water that I will give him will never be thirsty again. The water that I will give him will become in him a spring of water welling up to eternal life.” (John 4:7-14, ESV)

Jesus isn’t content with her just thinking that he is a strange, thirsty Jewish man, there is a greater reality to who He is and he is going to help her see that.  He tells her that if she just knew who he was that she’d be asking him for water.  But she doesn’t get it.  Who does this strange Jewish man think He is… he doesn’t even have a pitcher to draw water with, how can he give her water?  Is he greater than their ancestor Jacob?  She asks as much assuming that he is just a strange man, never quite grasping that she is having a conversation with the Messiah.

The irony here is that Jesus is greater than Jacob!  The first readers of this gospel, like us would have understood that right away.  It is obvious that this woman doesn’t know who she is talking to.  So what does Jesus do?  He gently states that he is greater because his water satisfies where as Jacob’s well leaves those who drink from it thirsty again and again.

While she can’t see the reality of who Jesus is, He sees the reality of who she is and he knows that she is thirsty for a real relationship with a holy God and so his next move is to help her see herself.  Look at how she responds and what he says.

One thought on “Seeing Sychar: Seeing Spiritual Realities in a Physical World (Part 2)”