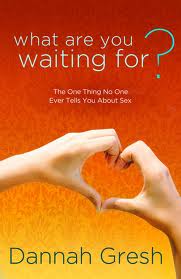 What Are You Waiting For?: The One Thing No One Ever Tells You About Sex

by Dannah Gresh is a refreshing book.  I picked up the book

as a youth pastor looking for a resource for leaders and others who are working with our young women. As a dad of a young daughter I was also looking for insight for the path ahead.  Dannah addresses  many of the taboo topics about sex that simply aren’t addressed in church and she does an outstanding job providing grace and guidance along the way.

Dannah takes the reader on a journey through the scriptures to get a biblical perspective on purity. Along the way she shares her own struggles, thoughts, and misgivings that provide a clear and relevant picture of how to apply the scripture and live humbly in light of God’s word.  She engages her readers well with the tension of where scripture meets life and has several real life examples and stories to share.

has been a handy resource and tends to be one of the most loaned out books I have in my personal library. I highly recommend it to Youth leaders, mothers of teenage daughters, college students, and women mentors, etc.

One note of caution. Be careful where you read this book

. I was reading it on the treadmill at the gym and a very nice woman (a few decades my elder) asked me what I was reading. The resulting conversation was interesting to say the least.

Over all I thought this was a great book

. The author has a brilliant writing style that at times is very poetic. I purchased my copy from amazon.com

Andy was one of those kids who was difficult to deal with in our student ministry. His parents were both committed Christians and you could tell that he had read a great portion of the Bible. This is normally a great thing, but you have to know Andy. Andy was a skeptic and more often than not when the youth pastor opened up the floor for discussion Andy would inevitably point out a flaw in the youth pastor’s message (like he said “Noah” when he meant “Moses” etc.) or he would rebut what the youth pastor had said with his own take on various passages of scripture. To be clear, Andy was a know-it-all and he knew a great deal, but he didn’t know Jesus. (Later Andy’s youth pastor would say, “I prepared the youth lessons and then I went back again to see what Andy might say so I could be prepared.”)

Andy also used to like to play games and pranks while the youth group was meeting. His youth group met in the church’s old sanctuary. Andy would often get dropped off early for church and slip into the baptistery or side door entrance. He would wait until the worship music had started and he would poke his head out and make funny faces at the group behind the youth pastor’s back. Andy was a clown.

Andy also hung out with the “wrong” crowd at school and would often drink on the weekends and even throughout the week.  Actually, because Andy had some influence and aggressively recruited others to his lifestyle, it’s probably more accurate to say that Andy “was” the wrong crowd. Andy wasn’t just a social drinker, he drank alone on many occasions, Andy was a teenage alcoholic and on a few occasions he showed up to his youth group buzzed. Andy was a drunk.

I guess there are lots of ways to deal with a kid like Andy. You could kick him out. You could tell him not to come back. You talk to him in a condescending way. You could do your best to make him feel uncomfortable so he will leave on his own… Or you could do what David our youth pastor did. Since David was one of my mentors growing up I have a little more insight into how he handled the situation than most.

Every week that David saw Andy at church he would say, “Hey Andy I’m so glad you made it tonight!” (and he meant it). David invited Andy into a special discipleship group that met in his home on a week night throughout the summer and was genuinely pleased when he showed up. David prayed for Andy (I know this because I was there on more than one occasion where I heard him). David talked with Andy’s mom about how to best love and encourage him. David encouraged some of the kids in the youth group to reach out to Andy. Some of these were even the kids that Andy made fun of at school.

The summer that David hosted the bible study at his home we all began to see a change starting to take place in Andy. At the end of the summer just before Andy and his family moved off you could tell that he was different. He stopped drinking (this was in large part because his dad caught him), he started a prayer group at church, and he went to all his friends and told them he had changed.

Even though he moved, Andy kept up with David and the youth group through regular mail (this is back before e-mail, text messaging, facebook, etc.). He graduated high school and went on to college to become a youth pastor. He went through a few more “tough-to-love” stages. He was a hypocrite and a self-righteous Pharisee… but at the age of 24 years old Andy finally met Jesus in a real and life changing way. I know this because… you see, I’m Andy.

I am the man I am today in part because of the attitude of my youth pastor and a friend (that I persecuted mercilessly). They weren’t willing to give up on me or just consider me an nuisance. They loved me and demonstrated Christ’s love for me in their actions and attitudes.

Romans 5:7-8 ESV  For one will scarcely die for a righteous person–though perhaps for a good person one would dare even to die–  (8)  but God shows his love for us in that while we were still sinners, Christ died for us.

I didn’t know the depth of this verse as a tough-to-love kid until I saw it in my Youth Pastor, David and my friend Brett (who I used to make fun of incessantly). They loved me in Christ when I gave them every reason not to love me.

Ok are you ready?  I am about to share the three keys for an awesome Disciple Now weekend.  This might surprise some of you, but I am not about to say, “The Band, The Speaker, and the T-shirts,” though those may be important in their own right.  There are 3 other things that I have seen bring about more lasting change than any band, speaker, or T-shirt has ever done.  In my estimation, if you can get these 3 right you can make up for a bad band or t-shirt (its really hard to make up for a bad speaker so we’ll make him the unofficial 4th key to a good D-Now Weekend). 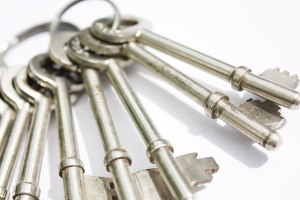 When designing a D-Now Weekend I like to start with the theme.  Generally speaking there are a lot of good and average themes out there (and I’ve done some of them).  You have your run of the mill, “back to the basics,” “true love waits,” etc, etc…  truth be told these are not bad themes.  They just lack the substance I am looking for.  If I’m going to invest the man hours that it takes to pull of a great disciple now weekend I want a theme that my students see practically 8 months down the road. (meaning they remember the theme as well as the event, and more importantly apply it to life.)

So what does that look like?  Take the “True Love Waits” theme and think about it.  Is that really the big issue?  What do you want to teach your kids? “Don’t have sex until you are married? Waiting for Sex is good?  Purity is better than impurity?”  Nothing overtly wrong with those statements, but what if you had the chance to cover the whole “don’t have Sex until you are married” theme put it in a positive light (give the kids something to strive for… rather than something to strive against) and at the same time lead your kids toward maturity in Christ?

How do you do that?  You take it a step deeper.  God didn’t just make you a sexual being he made you to be a man or be a woman.  The questions now isn’t, “will you wait?” But what kind of man or woman will you be?  The challenge changes from waiting to being.  As a pastor I am not so much interested in behavior modification as I am in leading students into a growing relationship with Jesus.  While “If you love them, you will wait” is not a bad theme, it is a small goal compared to God made you for a purpose as a man or a woman.

The bigger theme we went for in DNow last year and several years ago was “Biblical Manhood and Womanhood.”  The point was to help kids understand who they were in God’s eyes even down to their gender, realize how men and women compliment one anther, challenge our guys to be men, free our girls to be women, and help them to know how to encourage one anther in ways they will receive it.  While true love waits was part of it, it wasn’t all of it.

So now months later I can ask our young men to filter a thought our an action and do it along the terms of biblical manhood.   It doesn’t mean they all drank the cool-aide and are running around using the lingo, but it does mean we have introduced a filter to a world view that will help them evaluate their actions according to what kind of man or woman they are becoming.  This year we are going to do it all over again with the theme of Servant Leadership.

I realize that this idea Biblical Manhood and Womanhood may be new to many of you, so I have included a link to a previous post throughout this article.
//
//