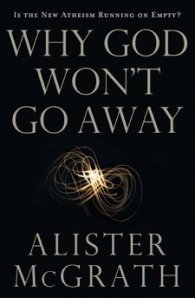 A while back i posted a comment on another blog about science and religion. I took a few minutes to make three solid and well reasoned points as well as to call into question the legitimacy of some of the points made by others who commented (I made no attempt to identify myself with a religion in general or Christianity in particular, but simply made textbook statements about the nature of science).  Because of the nature of the forum I expected a well reasoned defense as a  response… I was mistaken. The response I received was to be called an idiot in a variety of ways, over and over again by a variety of different people. Up to this point my experience with atheist friends of mine was of cordial disagreement and rational argument.

My experience on the blog and a previous comment on my blog where I got lambasted for being a dad piqued my interested in the New Atheist movement. So I decided to investigate Hitchens, Harris, Dawkins and others to see what was at stake. I was surprised to find that most of their material was really baseless work and that a lot of what they were getting by with in debate was disputable historical data, easily refutable analogies, and character assassination on anyone who didn’t agree with them.

I marveled at how such sloppy argument would be accepted and when I saw Why God Won’t Go Away: Is the New Atheism Running on Empty?

by Alister McGrath I jumped at the chance to read the perspective of a man who had debated some of these men in the public forum.  I really like the book and especially appreciated Dr. McGrath’s politeness in handling the dogmatic worldview of New Atheism and his candor in pointing out that not all modern day atheists belong to this movement.  Many, indeed wish to distance themselves from this more “fundamentalist” arm of atheism.

Disclosure of Material Connection: I received this book free from Thomas Nelson as part of the BookSneeze program. I was not required to write a positive review. The opinions I have expressed are my own. Some of the links in the post above are “affiliate links.” This means if you click on the link and purchase the item, I will receive an affiliate commission. Regardless, I only recommend products or services I use personally and believe will add value to my readers. I am disclosing this in accordance with the Federal Trade Commission’s 16 CFR, Part 255: “Guides Concerning the Use of Endorsements and Testimonials in Advertising.”